WWE Fastlane was a success

Having finally managed to sit down and watch the WWE’s newest Pay-Per-View, Fastlane, I am happy to report that I thought it was relatively successful.

The night had some decent matches and also laid down the foundations for the top feuds that we will be witnessing at this year’s Wrestlemania.

We also had the long-awaited return of The Viper, Randy Orton, after several months away from the ring – Queue the return of the #RKOOutOfNowhere trend on Twitter and Vine.

Randy Orton takes out The Authority

The return was almost too predictable in the way in-which it came around but then again I have been saying that for weeks during Raw’s main event matches. Every week seemed to be the perfect time for Orton to return but WWE kept him away.

Expect Rollins to be on the run during tonight’s episode of Raw as Orton takes out his former Authority teammates in order to get to Mr Money in the Bank. A street fight type of match is a must for this rivalry at Wrestlemania, given the hatred between the pair.

Speaking of hatred….. Wrestling fans got the confrontation that they never thought they would see last night as Triple H and Sting stood face-to-face in a WWE ring.

Apart from the lack of cool pyrotechnics and video work, WWE got this segment spot on. Having Triple H talk about the demise of WCW and how Sting was WCW showed real passion from the CEO of WWE.

Sting remaining silent throughout also adds to the mystery surrounding his reasoning behind going for Triple H.

Then of course we have the bat! Sting’s iconic weapon finally made an appearance and was immediately shoved into The Game’s throat as he challenged him to a match at Wrestlemania.

This was such a nostalgic moment, especially for fans in their 20s like myself, and Triple H receiving a shot to the stomach from the bat was a great way to end it.

Another moment of brilliance happened later in the night when the lights in the arena went out and we heard the mysterious/chilling sound of druids!

The crowd went mental and gave out the loudest cheer of the night as the sound of the gong hit the arena and Undertaker’s music started to play….. Were we FINALLY going to see The Phenom nearly one-year on from losing his Wrestlemania streak. 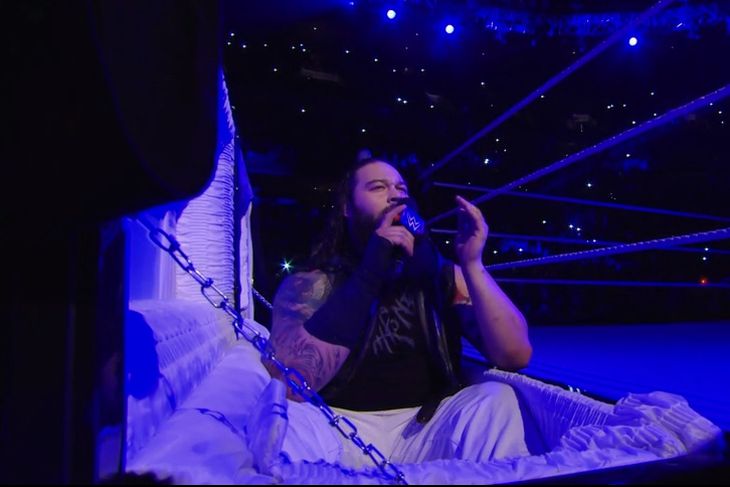 I’ll admit I was excited as a coffin was brought down to the ring thinking we were about to see the man himself…… BUT NO! It was Bray Wyatt!

The cryptic messages had finally led to the moment we all kind of suspected! Wyatt called Undertaker out for a Wrestlemania match, stating that he no longer fears him and that the veteran is now weak and mortal.

This was a great way for this storyline to become official and truly kick-off Wrestlemania season! How will Undertaker respond? Only time will tell but the good news is that this must mean that Undertaker is in better condition then what we have been seeing on social media.

I actually think that we won’t see Undertaker until Wrestlemania itself and we will instead be treated to freaky video packages and lightening bolts in the coming weeks….. just like back in 2004 during the Kane feud.

Away from these top moments, we had a great tag-team match that crowned new champions in Tyson Kidd and Cesaro which will bring some freshness to the division.

Dean Ambrose lost yet another match by getting disqualified….. but by stealing the Intercontinental Title afterwards I am hopefully of some good script writing in the coming weeks with Ambrose and Bad News Barrett .

And finally….. Daniel Bryan’s Wrestlemania dream came to an official, and clean, end as he was beaten by Roman Reigns.

This match was better than expected and was probably one of Reign’s best performances to date, showing exactly how powerful he is.

I was expecting Bryan to get screwed by a returning Sheamus or Dolph Ziggler heel-turn but that wasn’t to be – most likely to make Reigns looks as strong as possible heading to Wrestlemania.

The road to Wrestlemania has begun people! Lets hope the next few weeks are full of excitement, with loads of twists and turns along the way.