In yesterday’s SummerSlam preview I said that I hoped that the rumoured break-up of the Bella Twins would not happen.

Unfortunately the WWE decided to go ahead with Nikki turning on Brie, allowing Stephanie McMahon to pick up the win. 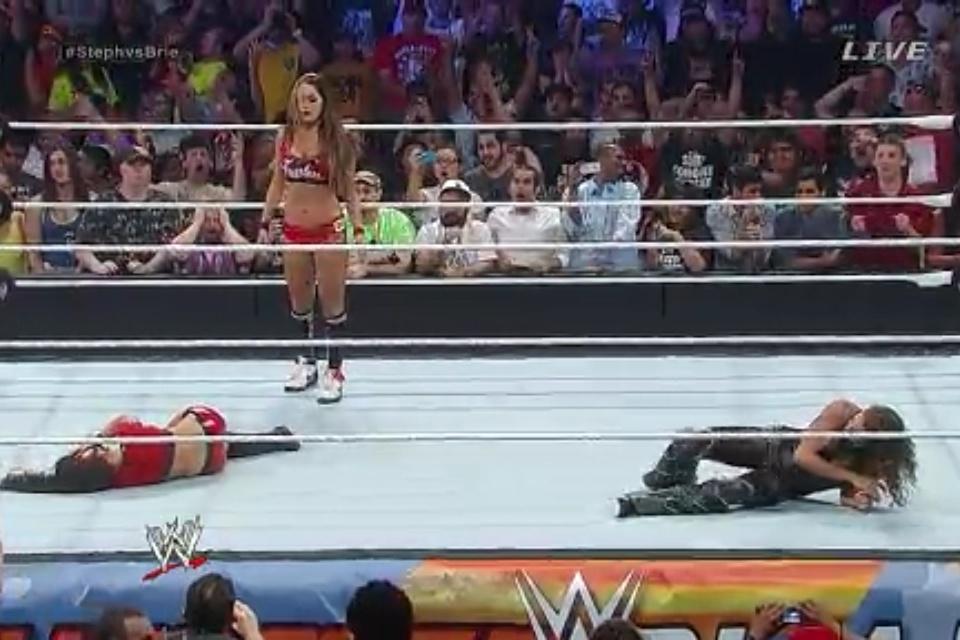 Nikki turns on her own sister

From the moment Nikki came running down to the ring I just knew that this meant she was about to turn on her sister. Admittedly they worked the split well and the fans in the arena still seemed shocked as Nikki pulled McMahon out of the way before striking Brie in the face.

Interestingly for me, Nikki did not once look pleased with her actions, nor did she celebrate with McMahon and Triple H. There was almost a sense that The Authority had put her in a situation where she had no choice but to turn on Brie.

It is possible that The Authority threatened to fire Nikki if she did not help them or that, just as with Seth Rollins, they have offered her guaranteed success if she joins them.

One thing I will say is that McMahon was relatively impressive in the ring and it was certainly more of a challenge for Brie then I am sure most fans had expected.

It will be interesting to see what happens next with The Bella Twins and McMahon on Raw tonight. There has to be a strong possibility now of there being a sister vs sister match at Night Of Champions.

Elsewhere at SummerSlam we witnessed both the Intercontinental and Divas Titles change hands, with Dolph Ziggler and Paige becoming champions of each respective title for the second time.

Hopefully Ziggler’s victory is the beginning of a push back up the card within WWE after being booked poorly over the past year. The match certainly brought some respect back to the title and Ziggler celebrating like he did just shows that it still means something.

The Lumberjacks try to contain Ambrose and Rollins

Paige winning back the Divas Title was a surprise to me but both she and AJ Lee are putting on some good performances and are by far the best female wrestlers around. Hopefully this battle will continue on to Night of Champions.

The match I was most looking forward to last night was the Lumberjack match between Rollins and Dean Ambrose. The pair certainly did not disappoint and the match was actually more fun then I had even expected.

The interaction between the competitors and the lumberjacks was great, the fact that Ambrose fought his way back into the ring showed off his attitude and persona excellently.

Having the lumberjacks lose control as the pair fought on into the crowd also helped to show just how much Rollins and Ambrose hate each other.

Kane interrupting and costing Ambrose the match was annoying but it was funny to see Gold Dust, of all people, squaring up to the Director of Operations.

The next stage for a rivalry as intense as this has to be a Steel Cage or even a Hell in a Cell Match. Lumberjacks couldn’t keep the action in the ring so one of them structures will definitely work as the stipulation.

Other winners on the night included Bray Wyatt, Rusev and Romain Reigns although I have to say that all three of these matches didn’t really impress me that much.

The win for Reigns is a great step as he progresses up the WWE ladder but there seemed little interest in the match from the crowd and it will be best for Reigns to move on and challenge Triple H.

As for Wyatt, this rivalry with Chris Jericho can’t end sooner as it has not worked at all and I have found the whole storyline boring.

Rusev will also need new opposition after deposing of Jack Swagger once again. He is still unbeaten in WWE so it is about time they through a big name in his direction.

You can check out my reaction to Brock Lesnar defeating John Cena right here: http://bit.ly/1pzaqUw