Well I certainly wasn’t expecting that when Brock Lesnar and John Cena made their way down to the ring for the main event of SummerSlam.

Cena was literally torn apart by Lesnar and it had to be on of the most one-sided title matches in recent history. 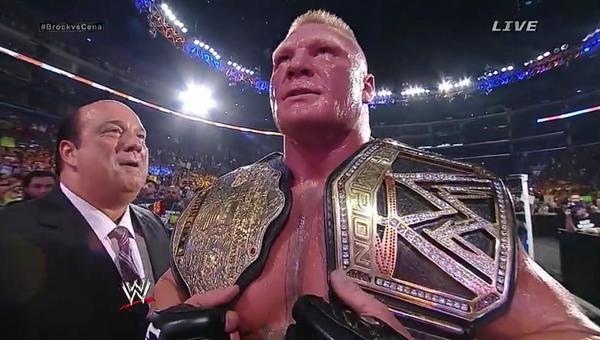 After years of being the ‘superman’ of the WWE, Cena was made to look weak and helpless compared to the beast Lesnar. No doubt many anti-Cena fans watching across the world loved what they were witnessing as Lesnar beat-down the 15-time champion.

Lesnar set the tone for the match after only 30 seconds, when he delivered an F-5 to the champ. Lesnar then went on to pummel Cena with a serious of punches and German Suplexes, 16 in total according to Michael Cole.

Cena barely offered any offense apart from one AA midway through the fight and his submission move, the STF, towards the end of the fight in a rare offensive movement.

Truth be told, the now former champion spent most of the match on his back with the referee constantly been told by Lesnar to ask Cena if he can even continue.

It was truly astonishing to see the poster boy of the company receiving such a brutal beating.

Having Lesnar win the title in such dominating fashion was a great way of showing that having him defeat The Undertaker at Wrestlemania was the correct the decision.

Right now it is generally difficult to see anybody within the roster that would be capable to beating Lesnar, he is just that powerful and dangerous.

WWE doctors attend to Cena after the match

It is going to be interesting to see just how the WWE use Lesnar as the champion, especially with his part-time contract.

It is likely that they will allow Cena to have a rematch at Night Of Champions but if that is the case they will have to be careful of how they work the match.

Cena can’t all of a sudden be able cope with Lesnar in the ring and be able to beat him down. It will again have to be a struggle for Cena to get a foothold in the match.

The outcome will no doubt be decided depending on Lesnar’s contract with the company and on the amount of time WWE are willing to have a champion that is not on Raw every week.

After all the drama involving CM Punk leaving the company, Mr McMahon will not want to risk other superstars becoming frustrated due to a part-timer holding the title for a long period of time.

Look out for more reaction to SummerSlam later on today, as I look at the other key moments and shocks from the PPV!